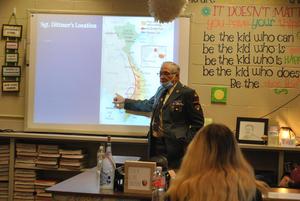 On Friday, November 12, Mr. Jim Dittmer visited Mrs. Lauren Lemmon-Hoffman’s ninth grade history classes to share with the students his experiences fighting in the Vietnam War.  He talked to them about when he was drafted, the training he was given, how they passed the time while in-country, and the effects that those experiences (including exposure to Agent Orange) has had on him and his fellow veterans.

Below is some background on Mr. Dittmer, who has graciously agreed to assist with previous Veterans’ Day activities as well.

Thank you to Mr. Dittmer for sharing his experiences and for his service, along with that of all our other local veterans!